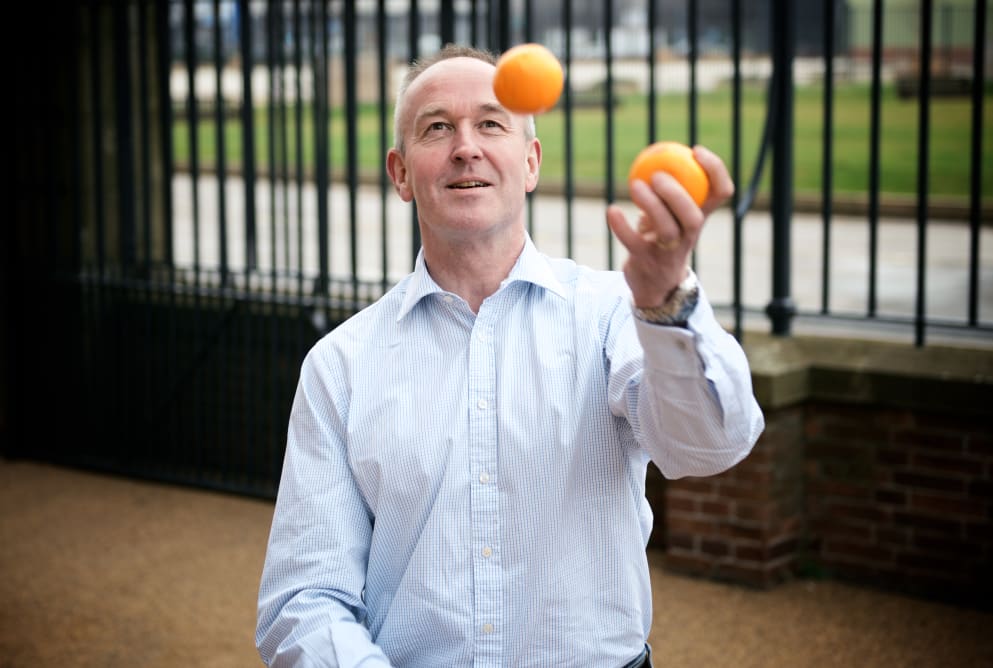 Simon on the Streets (SotS) are incredibly fortunate to have such dedicated support from the community for the work that we do to help homeless and vulnerable adults who find themselves on the streets. Our outreach workers are a real credit to the organisation and the work has persevered and persisted for over 21 years now. Over the last 7 years, SotS has also been really fortunate to work and build a lasting friendship with a really inspirational person. To many he is known for being the guy in the red shoes but to us he is Tim Collins.

Tim’s niche expertise is in coaching barristers and solicitors to become judges and QCs. He also helps clients develop their careers and provides businesses with advice too. What makes Tim a bit different is his approach to life. His values cut through his business and he has made actively supporting a charity a key pillar of his business model. Having got to know Tim over the last two and half years, I sat down with him (virtually!) to talk in depth about what inspires him, where the business started and why he thinks more people should have a model like his and put charitable giving at the core of their businesses.

Why do you feel it is important to support a charity?

“To me it’s about identifying what your ‘currency’ is. Once you’ve got enough money to get by, you’re secure - and in a position to work out what you want to do. In getting to that point, it’s easy to get stuck on tramlines. With the job, family, mortgage, what’s ‘enough money’ becomes shifting goalposts. So when I’m mentoring businesses, I ask them the question – what is your currency? Is it about making loads of money? Or about having enough to get by, enjoying what you do, making a difference and being appreciated by/appreciating others?

The other day I heard a couple of people I had coached were appointed judges. That was a good currency day, even though on the day itself I didn’t earn a penny – I just had the reward of knowing I’d helped them achieve what they wanted. I’ve met a lot of people in my time who have amassed a great deal of money but many are often miserable, and I don’t want to be like that! None of us own tomorrow in terms of our health, what we earn, so why not live for today and live it fully.

There definitely has to be a balance. Some people try to cling on to everything, but others give continually and become knackered because they don’t look after themselves. I have no problem in making a profit and charging money, but then I have a choice with what I do with that.”

When did you set up your model and how did the idea come about?

“It’s a really simple corporate social responsibility (CSR) model: if someone refers me to another person, I give 10% of anything I earn from them to Simon on the Streets. I thank my client for recommending me and tell them about the donation which also raises awareness of SOTS’ critical work.

Secondly, I have a pricing model called ‘Pay Fair’, which means I have a suggested hourly rate but my clients pay what they think is fair. It tries to put a value on my time while building trust and allowing people who cannot afford my rate to be able to work with me. If someone pays me more than my suggested fee, I donate the extra to SotS too.”

What made you want to support Simon on the Streets?

“I set up my business around 7 years ago, and a few months in I went to a networking meeting and met Helen and Jamie from SotS. I had always liked the idea of giving money away if someone recommended me to another client, but this was at a time when I was struggling to get my business going – I’d only had 2 clients, bugger-all work really.  At the event Jamie spoke about his experience of homelessness, how he battled his way through and is now an Outreach Worker helping other homeless people. I found it incredibly powerful and I also wanted to give to a local community project. I’ve supported SotS ever since.”

What impact do you think you have had on others with the way you work?

“I think it’s encouraged some of the people I work with to also support SotS – which is just fantastic. Several clients who I helped become judges have given their first day’s salary to SotS, and others have made generous donations.

I usually give new clients some initial free advice and will frequently send them some further guidance for free. At the end I add a link to the SOTS donation link and ask that if they found my advice helpful to make a donation.  Many do make a donation which they will often do anonymously – which is great”. I’m lucky to be able to work with some great people who have very sound values.”

Have you felt that this specific model has helped your business?

“There’s a reason why big businesses do CSR! It helps to create a positioning where you are trusted and you exhibit the right values. So in terms of brand image, it is really important. This can all feed into establishing a positive rapport with clients, also really important – even though it’s hard to measure. A lot of the people I work with, particularly those doing family, crime or immigration work are aware of vulnerable people in society so are already more sympathetic in the first place. To me it’s a really positive association. I also mentor businesses and I advise some of them to use a similar model. Pick a charity that you want to support and create some positive karma.”

What has inspired you along the way to make you build a business model that has giving to charity at its’ core?

“I had a mate at school whose dad worked at Heathrow Airport, and for some charity appeal they asked their staff to round-down their monthly salary to the nearest penny, pound, etc… all different levels. So everyone could make a salary sacrifice within their means. They raised tens of thousands and no one really missed the money they donated. When I started off my career working for Procter & Gamble – a large multi-national company – they were raising money for Children in Need, and I suggested they do a similar thing.

They said no – they wanted people doing challenges and team bonding instead. I thought the idea was to raise money, but they wanted to build camaraderie. When they gave their cheque it was a lot of money, but I just thought, looking at the numbers and the number of people P&G employed in the UK they could have given a lot more.

There’s a difference between giving your money and being parted with your money. Some companies are advised on CSR, and are told to give to a charity – which runs the risk for them of feeling parted with their money. I don’t want to be parted with my money, I want to give.

One of my big inspirations are Hope & Social, who also played a undraising gig to celebrate SotS 20th anniversary. They are great musicians but financially incontinent! They recently generously sponsored me the most of any of my sponsors for the SOTS’ Little Sleep-In I did in my back garden in May. I just think that was amazing. I have a mate who is a big H&S fan as well and his daughter was a medical student. She was due to do an elective to India and wanted to raise money for it. H&S offered for her to look after their stall at a gig and they ended up just giving her all the money from their merchandise sales. They give from their hearts, which I know are huge and they have and create fun – they embody what I’d call real currency.

And I think business should be fun. So when I set my business up, I included a number of different things. My business is called Wow Thank You Limited because I couldn’t get ‘Tim Collins Consultancy’, and because I thought it would be amusing for people to have to write cheques that say: ‘Wow Thank You’.

When I set the business up, I talked a load of waffle to my best mate about how I could brand and position myself. He said, straight out, ‘Tim, you’re talking a load of crap’. Then he asked me to send him 4 words that describe my business. I thought about it and came up with: fun, creative, challenging and honest. They are my 4 values and he created my logo.”

Why have you continued to support Simon on the Streets for as long as you have?

“Because of the work that you do. For me, society is about how we care for the most vulnerable but  actually we are often quite crap at that. People fall through the net and then they don’t get cared for. Supporting people when the rest of society has turned its back is what SotS do and it’s this work I will always want to support.”

To learn more about Tim's 'Pay Fair' model and his work visit asktim.org.