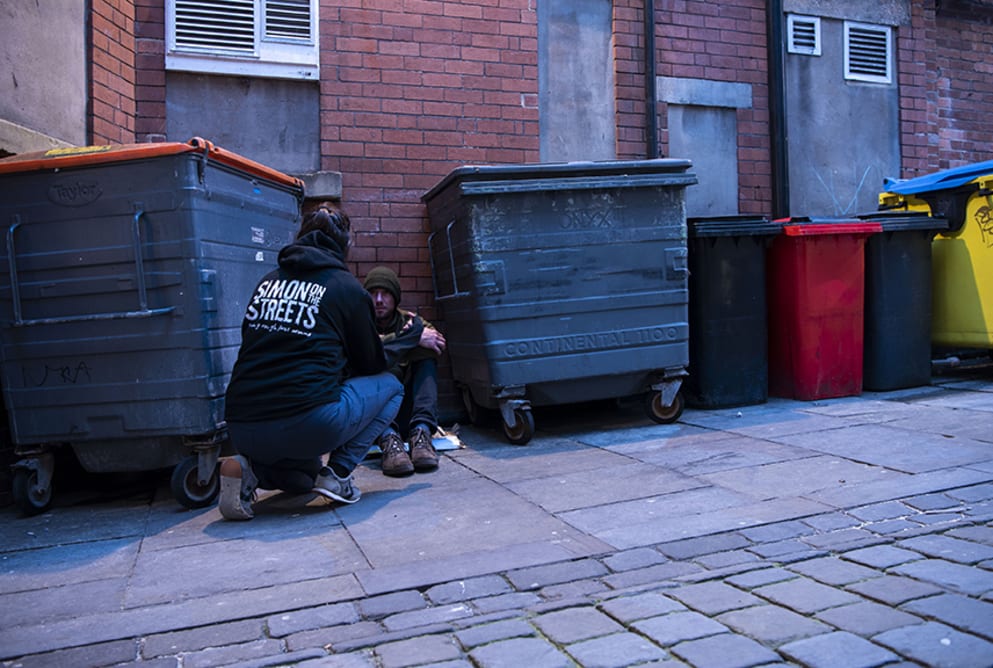 Providing a place to stay is rarely the only solution for the people we support. This is because homelessness is a complex issue and access to housing is not the only solution. Our service users often return to sleeping rough after time off the streets – in a hostel, b&b or supported accommodation.

We have been working with Callum (real name not used) for over a year and, like many people we support, he has gone through cycles of sleeping rough, accessing accommodation and being back on the streets again. Throughout Callum’s journey, we have been able to work with him. Simon on the Streets will work with any individual as long as it takes, however many times they need.

We hope this case study from one of our Outreach Workers provides an insight into why giving someone a bed for the night is only a small step in that individual’s journey.

“I first met Callum two years ago in the city centre. Callum told me that his life had been one long cycle: he would be in a good relationship, living in a flat or house with his partner and be working. However, when his relationship ended he would find himself without a home, would soon lose his job and he would turn to drugs and alcohol to help numb the pain. Inevitably he would end up in prison for some petty crime and would suffer periods of depression.

When I began working intensively with Callum his drug habit and his mental health were very bad. I was able to help Callum access an emergency hostel providing him with a place to stay for the night. However, Callum continually missed the curfew time meaning that he would end up sleeping on the streets.

Callum soon left emergency accommodation altogether and moved further out of the city centre, making it harder for me to find him, and he began sleeping in an abandoned old building with a friend. One day, Callum woke to find that during the night his friend had passed away next to him. The loss of his friend was very traumatic and Callum developed Post-traumatic Stress Disorder (PTSD).

I persevered and worked hard to reengage Callum and managed to get him a meeting with a housing provider. He was offered a flat but unfortunately it did not come with any type of support. Callum took the flat but had trouble sleeping there due to his PTSD, as he did not like sleeping along without someone to wake him due to his fear of passing away in his sleep.

Callum was unused to a life off the streets and felt lonely. His mental health was bad and he began bringing friends back to his flat in order not to feel alone.

Unfortunately, Callum was taken advantage of and one of the people who had been coming back to his flat found out his pin number and after stealing his card withdrew all his money out of his account. This left Callum unable to pay his service charge and on top of that his flat was a mess. His mental health had deteriorated massively whilst in accommodation, getting worse rather than better.

I managed to advocate on his behalf to stop him getting evicted and this gave him the motivation to work with me to maintain his tenancy. Callum’s priority was trying to improve his mental health so together we visited a GP. Callum was given medication for anxiety and depression. I also organised an appointment with a mental health worker who recommended he sees a psychiatrist about his PTSD.

Callum had often mentioned that he was keen to reconnect with his family as he had lost contact with them due to his frequent relapses. He felt that he had let himself and his family down. Callum was doing well I helped him arrange to meet his family.

Eviction and back on the streets

Callum continued to have people around his flat and he began a new relationship. Unfortunately he completely disengaged and soon lost his flat after drug paraphernalia was found there. Whilst he soon broke up with his partner, he continued to lead a chaotic life on the streets and trying to get Callum to engage with me again was difficult. Free from living a life of rules, including curfews and required check-ins, and back with his friends on the streets, Callum was reluctant to reconsider going back into housing.

Back into a hostel

I kept in contact with Callum as best I could and would try to find him on outreach sessions. One day, Callum asked me if we could go to Housing Options. We went together and he was offered a place in temporary accommodation. Following a housing assessment and was offered a more permanent stay in a hostel.

Supporting Callum emotionally with his decision to try and access emergency accommodation again has been very important in helping him reflect on the changes he wants to make in his life. I was only able to do this with Callum by building up a trusting relationship and being there for him throughout the time that I’ve known him.

Callum has now moved into the hostel, which he can stay in for 6 months until he moves into more permanent accommodation. He’s worried about how he will get on there, especially as the rules and regulations contrast with his current chaotic lifestyle, but he’s determined to try. On the day Callum arrived, the other hostel residents were in the lounge area, playing pool, whilst coffee and food was out on the side. The atmosphere was friendly and welcoming, which reassured Callum that be might be okay here.

We will continue to stay in contact and support Callum for as long as it takes, however many times he needs us.